Being able to watch movies all day and call it work is the dream, right? Well Sam Summers, a PhD student in animated film at the University of Sunderland does just that. “I’ve been fascinated with animation since I was a child—ok, most children are fascinated with animation—but I never really got over it.” This enterprising cinephile found a way to turn his passion for animation into a doctorate, and hopefully a long academic career.

After completing his undergraduate degree in English Literature (with a bit of film studies on the side) at Newcastle University, Sam knew he wanted to continue his education and study animation. He started to research Master’s programs in film and reach out to lecturers at universities around the UK. That’s when he ran into some challenges. He was originally interested in doing an MA, but Dr. Susan Smith at the University of Sunderland told him the school wasn’t currently offering an MA in film. As he and Dr. Smith (who would eventually become his supervisor) kept talking, a surprising thing happened: “She asked me about my ideas, and told me that she thought I had the potential to go straight to the PhD level.” Sam didn’t even know it was possible to bypass the MA, but he was impressed by the way Dr. Smith took an avid interest in his work and pushed him to achieve his potential. Sunderland’s world-class Centre for Research in Communication and Media Studies helped seal the deal and he was soon enrolled as a doctoral candidate.

Sam focuses on animation and the way that the aesthetics of popular, mainstream animated films have evolved over time. He noticed that the different periods of animation from the 1920s to the 1990s had been the subject of many scholarly works, but that there were no serious historical overviews of animation aesthetics post-2000. Sam decided he would try to map out this period, which includes the movies Millennials and Gen Z-ers grew up with (and some of the most popular film franchises) such as Shrek, Toy Story, Kung Fu Panda, and How to Train Your Dragon. “I’d like to encourage the public to look at these products they interact with every day in a new way, and to encourage academics to take them seriously as objects of study,” explains Sam.

He has already started helping academics and the general public rethink how they interact with these beloved animated classics. In 2015, he organized a two-day conference in honour of Toy Story’s 20th anniversary. As part of the conference, he held a special screening of Toy Story at his local indie movie theatre followed by a lecture from Paul Wells, one of the biggest names in animation studies. “The cinema was packed not just with academics but with members of the public, many of whom even brought their kids along. I loved the sense that I was taking film studies far beyond the boundaries of the university, and reaching people who would never attend a conference or pick up an academic book.”

He hopes to continue this work through an academic career and open more film departments up to animation studies. He’s done some work with BBC radio and would like to get more involved with the mainstream media to bring film studies to a wider audience. Sam’s dream is to be asked by a studio to contribute to a DVD commentary, documentary, or exhibition. “I’d love to hear my voice on some kind of anniversary release of Shrek!”

When starting a PhD, even one of your own design, Sam advises choosing a topic you’re passionate about. “Make sure to pick a topic that you’re sure you’ll still be interested in by the end of the PhD. Trust me, even watching cartoons becomes tiring when it’s all you’ve been doing for three years! Even when I’m not watching specific cartoons for research, I go to the cinema whenever I can, because I think it’s vital to my work to keep on top of the latest trends.” Even if the constant movie watching does sometimes get tiring, Sam still has “ah-ha” moments that make it all worth it. Like when he finally figures out the answer to a difficult question such as “how does this film fit into the established historical or theoretical narrative?” or “how can these findings be explained in the context of existing theory?” “Nothing compares to the feeling you get when you make a breakthrough,” says Sam.

Sam believes that a supportive mentor—like he has found in Dr. Smith—is an important way to inspire more students to continue on in academia. “I think the most encouraging thing is when lecturers take an interest in students at an undergraduate level, let them know when they’re doing really well and urge them to think about studying at a higher level.” Sometimes all you need is the right person to see your potential and push you to accomplish things you didn’t think you could, like going straight to a PhD. 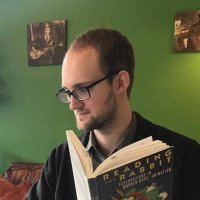 Sam is a PhD student in animated film at the University of Sunderland looking at the way that the aesthetics of popular, mainstream animated films have evolved over time.
Twitter