A new source of clean energy might just be under our noses, or more accurately in our ponds and lakes. Cyanobacteria (also known as blue-green algae) are a type bacteria that fixes CO2, a key component of butanol. Butanol is a promising biofuel that’s more efficient than ethanol made from corn or sugarcane. As the world seeks to reduce its reliance on fossil fuels, cyanobacteria could be the (quite literally) green technology of the future. Paul Hudson, an Assistant Professor at KTH Royal Institute of Technology in Stockholm and a SciLifeLab Fellow, researches these CO2-fixing bacteria. His research group has modified cyanobacteria genes to produce biofuels through the cells’ natural metabolic process—all without the harmful emissions.

Cyanobacteria use the energy they derive from sunlight via photosynthesis to fix CO2, while some other bacteria use energy from hydrogen gas. Since both sunlight and hydrogen are cheap and plentiful, Paul’s group has altered the bacteria’s metabolism so that they use their CO2 to produce things like chemicals, plastics, or biofuels. To do this, they made mathematical models of the cell’s metabolism then add new enzymes and genes to the bacteria’s genomes. Through this process they can turn off some genes that aren’t needed for production. “Deciding which genes to turn off and which new genes to add so that the cells produce chemicals efficiently is a big part of my research,” says Paul. They want to install a metabolic switch inside the cyanobacteria so that the cells first use CO2 to grow to a certain density, but then start using it to produce a biofuel which is secreted out of the cell continuously and collected.

Paul’s group has developed a CRISPR/Cas system to turn off different genes in the CO2-fixing bacteria. CRISPR is a molecular tool that be used to permanently edit specific sections of a living organism’s genome. It allows researchers to control gene expression and even change the sequence of multiple genes inside the cell. Paul’s group has used CRISPR to turn off several genes in the cyanobacteria that were stealing carbon and energy away from biofuel production. The modified bacteria produce less unwanted oxygen and over 300% more biofuel. They can also use CRISPR to assess the importance 4000 genes involved in the cell’s metabolic process by disturbing the cell’s metabolism in different ways and seeing how each gene responds.

CRISPR gives Paul’s group the power to streamline their cells. They want to determine where the cell uses resources that aren’t directed toward biofuel production so that they can make lean, fuel-producing bacteria. Being a part of SciLifeLab, a national research center collaboration between four Swedish universities, gives Paul and his group easy access to expertise from a variety of fields.  Early on SciLifeLab made headlines by sequencing the genome of the spruce tree making it clear they were serious about being world leaders in “omics” technologies. As SciLifeLab’s mission includes environmental research in addition to medicine, Paul has been able to connect with new people who would not otherwise be available on campus. “Right now we are using state-of-the-art transcriptomics techniques with the help of world-leaders in this field at Karolinska Institutet. Through another collaboration we are using outstanding proteomics and mass-spectrometry platforms. Normally these tools are used to study disease states so we are very fortunate to be able to use them on our CO2-fixing bacteria as well.” Access to these techniques puts Paul’s group in a position to answer questions about the fundamentals of cyanobacteria metabolism that would not be possible elsewhere.

The strain of cyanobacteria that they develop could be used in industrial process to convert sunlight directly to chemicals or fuels. The bacteria could also be powered by solar- or biomass-derived hydrogen, which is abundant in Sweden thanks to the lumber industry. Each of these new bacteria-based processes would emit less CO2 than oil and would require much less arable land than current biofuels (ethanol) produced from corn or sugarcane. Since they are also studying the fundamentals of photosynthetic metabolism, their findings could be applied to plants to help other researchers create more efficient crops.

Paul is driven to continue his work on sustainable fuel production by other environmental innovators. “I find inspiration for my work when I see the creative solutions that people (not just scientists) come up with to preserve natural resources and reduce environmental impact, particularly in Sweden. It lets me know that society values our work.” 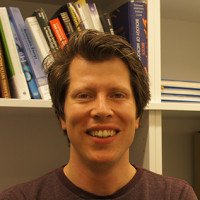 Paul is an Assistant Professor at KTH Royal Institute of Technology in Stockholm and a SciLifeLab Fellow who researches cyanobacteria.
Website

SciLifeLab is a national center for molecular biosciences with focus on health and environmental research. It is a national resource and a collaboration between four universities: Karolinska Institutet, KTH Royal Institute of Technology, Stockholm University and Uppsala University.