When most of us hear “CT scan” we think of the medical procedure. But CT machines are also becoming the standard tool for looking inside objects of all kinds in research and industry. A new lab at Centrum Wiskunde & Informatica, the Dutch national research institute for mathematics and computer science in Amsterdam, is making this type of imaging more accessible to math and computer science researchers. It's also drawing interest from the art, history, and the social sciences community.

Sophia Coban, a postdoc in the Computational Imaging group helped develop and establish the new FleX-ray Lab. The lab is centred around a state-of-the-art computed tomography (CT) machine which uses X-rays to look inside objects and create a 3D rendering of it almost instantaneously. The real time data processing makes it possible to adjust the scanner mid scan, allowing scientists to get more useful information from these scans than with other machines. “The CT machine that we have is extremely customizable,” says Sophia. “It can accommodate any size or resolution which is why we have so many people interested in our laboratory. We can kind of work around a problematic sample or just do something very specific quickly or in real time.”

She was drawn to CWI because of her group leader, Joost Batenburg and the impressive group he had managed to put together in a relatively short time. “Once I moved to CWI I understood how it was possible that this very young group had already become so big,” says Sophia. “At CWI you have mathematicians and computer scientists working together in such a way that information flows between them very easily. There’s a nice synergy going on between the different groups that makes research easy. Plus the fact that CWI was in Amsterdam, I'll be honest that also drew me in.”

Sophia has extensive experience with CT machines from her PhD in applied mathematics where she focused on approaches to 3D CT reconstruction and analysis. This made her a natural choice to help manage and operate the new FleX-ray Lab. The opportunity to manage a lab and supervise students is extremely beneficial for her own career development. The new lab is also hugely beneficial for the other researchers at CWI. There is often a gap between the mathematicians and the experimental scientists working in the CT imaging community. The FleX-ray Lab can help bridge this gap by offering mathematicians the opportunity to apply their research to practical CT problems. “Having a tomography lab is extremely useful for a math and science institute like CWI because it generates much real world data that you can use in a problem. You can always simulate data, but even if the math applies to a simulation, it doesn't always apply to the real world,” says Sophia. FleX-ray Lab has even opened doors to collaboration with other universities and major museums like the Rijksmuseum.

For the Rijksmuseum, Sophia and her colleagues scanned a series of mini terracotta sculptures to help the conservators better understand how the objects were made. In an earlier examination, the conservators had found a series of thin lines around the side of one of the sculptures. If the lines went all the way through to the inside, it would indicate that the sculpture was made of two pieces that were joined together. “But when we scanned the sculpture, there were no lines at all on the inside which meant that it was a solid piece. That immediately was something very big for the conservators,” explains Sophia. The scan also showed tool markings and even a fingerprint on the inside of the sculpture, which indicated that the sculpture had been made of one solid block of clay. “You can tell all of this and figure out what tools were likely used just from looking at the volumetric rendering. This technology is really big for museums,” Sophia says.

In addition to her research and managing the lab, Sophia is also involved in science outreach activities at CWI. One of her favourite outreach activities is the Amsterdam Science Park Open Day. All the institutes in Amsterdam Science Park, including CWI, open their doors to the public and share their work. At the FleX-ray Lab, families scan surprise eggs to learn about tomography and CT machines. Sophia and her colleagues ask for volunteers to put their eggs in the scanner and then they create a 3D rendering of the egg--complete with the toy inside! The kids then open the egg and see that toy matches the 3D rendering. “Kids just soak it up immediately. They absolutely understand the very basic concepts of tomography, this complex mathematical idea,” says Sophia. “We've done it for three years in a row and it's been such a success. I really like that CWI is super open about this and sees the value in outreach.” 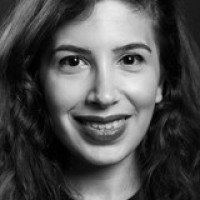 Sophia is a postdoc in the Computational Imaging group at CWI and the operator of the FleX-ray Lab. She earned a PhD in Numerical Analysis and Applied Mathematics from the University of Manchester.
Website