People around the world in the Middle East, North Africa, the Caribbean, and parts of Southern Europe and the United States rely on desalinated water for their daily water supply. Global warming and rising populations are putting a strain on freshwater sources and forcing more communities to remove the salt and minerals from saltwater to meet their needs. However, desalination is an expensive and energy intensive process. As the world’s desalination capacity grows, it becomes increasingly important to find a way to make the process more sustainable. That’s where Professor Hassan Arafat comes in. Hassan is a professor in the department of chemical engineering at Khalifa University of Science and Technology. His group looks for ways to enhance the sustainability of desalination processes by reducing the amount of energy and chemicals needed to desalinate water.

Four years ago, Hassan and his colleagues started exploring the idea of using 3D printed structures to improve the desalination process. They zeroed in on a specific group of shapes called triply periodic minimal surfaces (TPMS) which were first described in the 19th century. Shapes with these surfaces are unique in that their surfaces are perfectly curved with no angles, corners, or dead ends. “You can think of these shapes as a rollercoaster. You can move on them in several directions but you never hit an angle. The track is always curved,” Hassan explains.

Hassan saw a potential application for TPMS shapes in the desalination process. During desalination, the water moves through a series of membranes separated by “spacers.” Typical spacers look like mesh, full of angles and intersecting strands. As a result, the water passing through them can become stagnant at certain points, especially where the strands intersect, causing fouling materials to deposit and bacteria to grow. Hassan thought that water might behave differently if it passed through spacers designed with TPMS shapes. His group 3D printed spacers based on TPMS designs and tested them in several different desalination processes. They found that the seawater passing through their 3D printed spacers behaved differently than conventional spacers. “The motion was turbulent, but at the same time smooth,” Hassan says. “The water never hit a wall or angle so it was always in motion, just like a rollercoaster.”

Overall, the performance of their 3D printed TPMS spacers was superior to conventional spacers in three important ways. Because the water passing through the TPMS spacers was never stagnant, the spacers were less likely to collect deposits of foulants like bacteria, solids, or dirt. The spacers also reduced the amount of energy required for the desalination process since the liquid was always in motion, thus reducing the pressure drop within the membrane system. The flux (the productivity) of the desalination membranes also improved as a result of the water’s increased motion turbulence.

“We tested the spacers in the reverse osmosis process, ultrafiltration process, and membrane distillation process. Every time we saw less fowling, lower energy consumption, and an improved flux,” Hassan says.

Encouraged by their findings, Hassan and his colleagues filed a patent based on the preliminary results. Now they are planning pilot testing to bring the spacers closer to commercialization. Fortunately for Hassan, Khalifa University has an Office of Technology Management and Innovation which is actively helping him look for partners to license the patent. “They are actually in contact with a potential US-based company right now,” he mentions.

Khalifa University was established in 2017 when three existing institutes merged to become one world class, research intensive institution. After the merger, the university created several research centers, including the Center for Membranes and Advanced Water Technology (CMAT) which Hassan leads. Professors who had previously worked at three different campuses now all work together at CMAT which has increased Hassan’s collaboration opportunities.

Hassan believes that better ideas come from collaboration and it’s what he enjoys most about working at Khalifa University. In fact, he first got the idea to use TPMS shapes through collaboration with a colleague in the mechanical engineering department. The professor was telling Hassan how he was using TPMS shapes in his own work and based on his description Hassan thought the shapes could be applied to spacers as well.

“I wouldn’t have that if I were working in a silo or if the university had a culture of individuality,” Hassan says. “This is what I love about Khalifa University. People love to collaborate here. If someone has the same attitude, then this is a great place for them to work.” 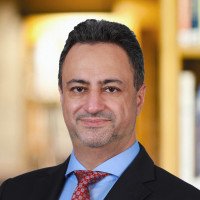 Hassan is a professor in the department of chemical engineering at Khalifa University of Science and Technology. He leads the Membrane and Sustainable Desalination Research group and is the director of the Center for Membranes and Advanced Water Technology.
Website

Khalifa University of Science and Technology

The newly-established Khalifa University of Science and Technology endeavors to be a leader among research intensive universities of the 21st century, while catalyzing the growth of Abu Dhabi and the UAE’s rapidly developing knowledge economy.

“Certain quantum algorithms have been proposed that will be able to break all of our security today.”

“There are just so many creative people here. As soon as you have an idea, you can start talking to somebody who's involved in that and they can give you feedback and help you develop it.”
Explore more stories
© 2020 Academic Media Group International AB. All rights reserved.